The dachshund may take the number one spot in aggression but that does not mean that the dog cannot be trained. Dachshund aggression can start as early as when the dachshund is only 6 weeks old. Punishing, shouting or hitting your dachshund at an early age when they do not understand what they have done may lead to problems with aggression as he grows up. They may be small dogs but with so much inherent aggression and big egos. Dachshunds were bred to hunt badgers, so naturally they are genetically predisposed to be aggressive. They do not take kindly to strangers and can be very nasty to anyone who visits. Some dachshunds have been known to bite strangers and surprisingly their owners as well.

Dachshund aggression may be caused by several factors like dominance, fear, injury, disease or their genetic predisposition. The important thing is to address the problem as soon as possible. Aggressive behavior in dachshund may be dangerous and may harm people and other pets if not controlled. 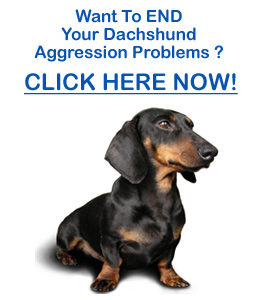 When you notice early signs of aggression which show up as early as six weeks, you must address it before it becomes a full blown problem that will be harder to deal with. Dealing with dachshund aggression it is essential to socialize the dog by 14 weeks with other dogs as well as people. An un-socialized dachshund will exhibit aggression especially with strangers. Teach people to treat your dachshund with kindness. Dachshunds may become aggressive due to fear. Strangers, children and other pets would pose a threat triggering defensive aggression in dachshunds. Fear aggression may often cause the dachshund to bite. Kind treatment will assure the dachshund that people are ok and can be trusted. This will eliminate the dachshund’s aggression towards them.

Dachshunds like to dominate. The desire to dominate makes dachshunds aggressive. In order to control dachshund aggression in this case, the owner should establish dominance over their dachshund from an early age. The owner must demonstrate to the dachshund that he is the pack leader. Demonstrating dominance can be done in simple ways such as eating before he does. You may also be the first to walk into and out of the house then he follows. Train him to walk on a loose leash and not pulling ahead of you. Be a strong leader and teach him.

When dealing with an aggressive dog, you should know that aggressive dogs should never be rewarded. It will encourage hostility.  Furthermore, a dog needs to be spayed to lessen its aggression. When the aggression does not subside after several attempts to eliminate the aggression it is time to get a professional’s help. Do not ever let it get to a point where your dachshund is physically attacking people, it may be too late.

Do not play games with a dachshund that involve chasing. Remember they are hunters and are trained to kill and when such an opportunity is presented to them. Such games will trigger dachshund aggression. Besides, you can never outrun a dachshund so it is best to avoid such games altogether.