Dachshunds were bred to be hunters. As hunters it is in their nature to kill, so it naturally follows that dachshund biting is in the genes. Dachshunds will often bite due to fear, anxiety or aggression. It is essential to teach your dog at an early stage not to bite. Because they are small their biting may seem playful and you may even ignore it as harmless. It may escalate to a more serious problem and bring out aggressive behavior that could be dangerous to other pets and people particularly children. So address the problem as soon as the early signs show up.

When it comes to fear it is the unsocialized dachshunds, more than any other breed are the most likely to bite. An event may have happened to trigger fear early in life making the dog a biter whenever he senses fear. Most shelter dogs are fear biters as they most likely have been victims of abuse. The biting makes interaction with new people and dogs scary rather than an event to look forward to. It makes owners keep their friends from visiting and taking a walk with the dog can also be a very tedious job. Sometimes the dachshund dog could bite if he is in a high state of anxiety. 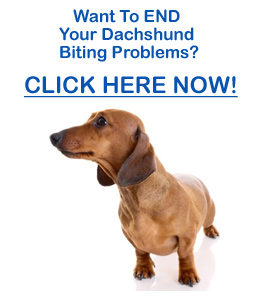 Dachshund biting is also a way of asserting dominance. If this is the case, show the dog that you are the alpha dog and that you are the dominant one. Dogs respect their leaders and will do what the leader wants. In cases of dachshund biting as a result of aggression, avoid playing rough games. The rough games may bring out the dachshunds aggression. It may lead to biting. Fear biting and aggression biting are often confused but very easy to distinguish. If their ears are pinned back along the head rather than forward it most likely it is out of fear.

There are several ways of dealing with your biting dachshund. You should say a firm NO when he bites, even playfully. Do not punish him. Give dachshund plenty of toys to bite on. Do this every time he bites. You could also whine or squeal in a high pitch when he bites you. The dachshund will know that it hurts and try to avoid it.

Though it is possible to train dachshund at any age, when faced with dachshund biting, the easiest and best time is when they are below six months old. Never hit back at a dachshund for biting especially when they are young and do not understand what he has done wrong. It may cause the puppy to develop anxiety and actually make the biting problems worse as they tend to bite when anxious. It is more difficult to train an adult dog not to bite. You may have to seek the services of a professional trainer. Make sure your puppy is well socialized as early as possible. When the dachshund biting threatens to get out of control, it is best to hire professional trainer to stop the biting.