Agility is a very exciting dog sport. The dog should try to complete the course in the shortest time without any blunders such as running the same course twice or knocking down a post. In dachshund agility, the handler directs the dachshund through an obstacle course using voice command and hand signals. Dachshunds being the intelligent dogs they are often complete a number of agility courses, especially if they are modified specifically for dachshunds to avoid jumping and climbing. Agility can be most enjoyable activity and must not be taken in all seriousness. It is so much fun for everyone involved and the spectators. Dachshunds being originally hunting dogs retain their aggressive nature. Agility training is a good way of redirecting their aggressive hunting instincts and abilities in a positive manner.

To take part in dachshund agility competitions, start by taking an agility class but take it lightly and have fun. Just like with any other training, always reward your dachshund afterwards. It will motivate him. 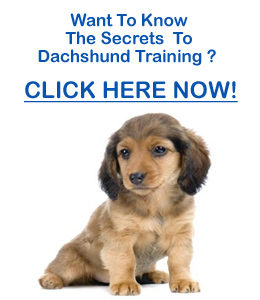 Agility, being a team event, requires both the trainer and the dachshund dog to work together to negotiate the obstacle course. This is a sport that involves quick thinking on the part of the handler. He must think on the spot and use verbal commands and body language to communicate to the dachshund. As a handler, your dog is depending on you. Agility has so much variety and every course challenges the dog in a different way. There could be tunnels, weave poles and tire jumps among others.

In dachshund agility competitions it is the jumps that pose the greatest challenge for dachshunds given their long bodies and short legged, sausage like physique. It takes time to master the jumps.  It is best to start with the pole nearly touching the ground and gradually raise it. Tunnels are where dachshund dogs shine in agility; being burrowers this is their tuff. Tunnels are the easiest maneuver for them as they were bred to hunt badgers on their burrow. Weave poles are a challenge to both handler and dachshund. Dogs prefer straight routes. Short legs also pose a problem. This is for the advanced classes. Agility courses that do not require the dog to jump or climb are great.

It is encouraging to know that dachshunds are quick learners when they are not being stubborn. To progress in agility classes it is best that the handler takes the classes lightly and does not put pressure on the dog. The dachshund needs to be constantly encouraged with praises, treats and motivation.