Generally, dogs communicate by barking. Some barking is may be communicating something useful like injury. However when the dachshund barking is excessive it becomes a problem. Excessive barking is not only annoying to the dachshund owner, family and neighbors; it also stresses lungs, throat and chest of the dachshund. As a breed dachshunds are barkers. They are originally German hunters.  As hunters they are predisposed to becoming hostile and barking at anything and anyone. They are aggressive and like to dominate and may actually think they own the house and the yard and will bark when there is an intruder or even for the sake of it. Do not let them get used to it. Stop it at an early age when your dachshund is still a puppy as it will become a serious problem later.

Dachshunds bark for several reasons. Dachshund barking may be to protect their territory, to raise alarm or to get attention. They may also bark to say hi or they have a need. Injured or sick dachshunds also tend to bark a lot. The degree of barking often varies depending on the cause of barking. 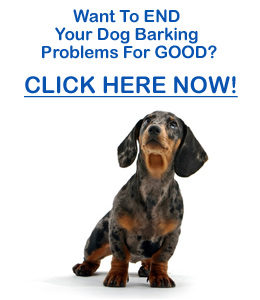 When dealing with excessive barking, start by finding out why your dachshund is barking. It is only after finding out why your dachshund is barking that you will know how to eliminate the dachshund barking problem. To eliminate the barking you must eliminate the cause. For instance, He could be seeking attention. If this is the reason, spend quality time with your dachshund. Exercise with him and train with him. Have time set aside to play with him and cuddle up. Although, you should do not do this only when he barks as you will be reinforcing wrong behavior. It is best to ignore him when he barks for attention.

Sometimes if you leave your dachshund for a longtime he will become anxious and bark excessively. It therefore becomes necessary to teach him to be home alone. At first leave him for some minutes then build up gradually. Eventually he will get used to you being away for hours.

Dachshund barking may not stop immediately and you need to be firm with the dog. When the dog starts barking allow him to bark twice then command him in a strong voice to stop. If he doesn’t, walk away or take him to another room until he is quiet then praise him. When dealing with dachshund barking you may keep some toys to keep your dachshund busy especially if he barks because he is bored.

Dachshunds are known to be stubborn but do not scold your dachshund. Just issue the ‘QUIET’ command. If you shout it will make matters worse and take him longer to make a connection with the command amidst the yelling. Remain calm at all times. When the barking becomes excessive and nothing else works you could bark control collar. Nevertheless it is important to take your dachshund to a vet in case there is a serious underlying problem that is causing the barking.