In this article we’re going to have a look at some of the most common Dachshund problems and how to prevent them. Back problems are the most common among dachshunds. This is because of their elongated bodies and short legs. Dachshunds are likely to suffer slipped and ruptured disks. To avoid back problems make sure that the dog doesn’t jump up and climb onto furniture by himself. Always carry the dachshund with care making sure that their whole back is supported. Discourage young children form lifting him. Keep the dogs weight in check because obesity strains the dogs back leading to back problems.

Dachshund problems are often prominent during training. Dachshunds are proud little creatures. They have a stubborn personality and are arrogant making training a huge problem. To make it easier, praise him enthusiastically during training and reward him with treats afterwards. You should never indulge his stubbornness as a puppy. Otherwise it will create greater problems later. Deal with their stubborn nature in a firm but loving way from moment you bring him home. Start by teaching him simple and basic obedience commands. They patient with them as dachshunds resist force and may become irritable when pushed. The dog may respond defensively and their aggression will surface making the whole experience unpleasant. Do not handle them harshly. 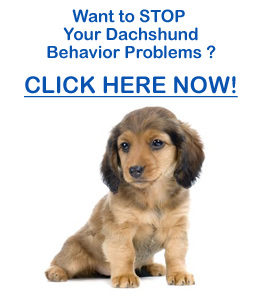 Another huge problem with dachshunds is that they have a mind of their own which makes them difficult to teach. They also tend to be manipulative. Show them that you mean what you say and be consistent. This will help eliminate dachshund problems in training.

Dachshunds tend to be snappy. Mostly when treated unkindly. Dachshunds are usually very affectionate and love getting the love back. They are playful and love physical attention like cuddling. Be careful how you treat dachshunds especially when you correct dachshunds, they may snap and strike back.

Dachshunds were born to dig. Even their long low bodies designed for burrowing into rabbit and badger holes. This can be one of the serious dachshund problems as they dig all over. They may end up ruining your garden, yard and flowers. They may even dig their way under the fence facilitating escape. Give the dog plenty of exercise to avoid all the digging.

Another of serious problem with dachshunds is aggression. Since they were bred as hunters they are therefore fighters. They do not take kindly to strangers and can be nasty. You must show him you are the alpha dog. Correct any sign of aggression quickly before it becomes full blown aggressive behavior. Socializing the puppy with other people also helps with aggression.

Another of the dachshund problems is jealousy. The dog can be jealous of other family pets and children when they want attention. They can be possessive of their toys and like to have their own space. Jealousy or possessiveness may be early signs of potential aggression towards anyone who interferes with their space. Put a stop to jealousy and possessiveness as soon as possible.

Dachshunds also bark a lot. This is one of the common dachshund problems often provoked by new sights or sound, among other causes like anxiety. Be very quick to deal with this problem.