Dachshund dogs are known to have chewing problems. It is their natural instinct to chew and can therefore be difficult to stop dachshund chewing, especially given their stubborn nature. Some dachshund owners let their dachshunds chew on anything. Reason being that they think it is natural. Other owners do not allow the chewing at all. Well there could be times when chewing is acceptable and times when it is not. Keeping a dachshund from chewing is very difficult and depends on why the puppy is chewing in the first place. Though it is good to know that chewing in dachshunds is very common when they are puppies but most dachshunds outgrow it.

Chronic dachshund chewing can be very destructive. Chewing dachshunds destroy shoes furniture and house hold items. It therefore becomes difficult to keep the dachshund from destroying your belongings. Do not be discouraged. With proper training the dachshund will stop chewing as they are intelligent dogs. 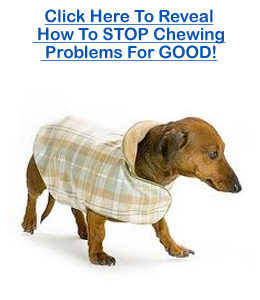 Dachshunds mostly chew when they are bored and lonely. They will frequently chew when the owner is away. It is therefore a good idea to keep your dachshund active to avoid mindless chewing. So when you leave make sure you provide the dachshund dog with plenty of toys to play with, to keep him active. Alternatively, you could keep him in a crate.

Sometimes dachshund chewing may be due to teething. In such a case do not stop the biting but redirect it. Give him toys to chew on. In this case if you do not facilitate the chewing then do not get mad when he chews on your shoe. When he is teething the dachshund has to chew on something. When choosing chew toys for your dachshund do not choose toys that resemble the thing that he loves to chew most.  For instance, if you don’t want your dachshund dog to chew on shoes do not give him an old shoe to chew on or buy a chew toy that resembles a shoe. If your dachshund tends to chew on particular items you could use sprays like cayenne pepper. The items will taste very bad and the dog will never want to chew on the item again. He will associate those items with bad taste.

To help with the dachshund chewing problem, you should never let him nibble on your fingers, even if it seems playful and innocent. The nibbling will lead to chewing then biting. When he nibbles on your fingers make him stop. You must control his chewing from an early age even when it seems harmless.

When training a dachshund with chewing problems use positive training techniques and never shout at or smack your dachshund. The dog may respond aggressively, and it may end up badly. You should show the dog that it is not ok to chew on furniture and other stuff but in a firm friendly manner. Teach them to chew on the right things. When dealing with dachshund chewing, be cautious of what your dachshund chews on. You might consider some toys for dachshunds which can certainly help with the chewing. Some items may be toxic and may cause illness and in the worst case death of the dachshund. Do not let him chew things he is likely to swallow. He could choke on them.