Dachshund puppies are very cute and adorable. These puppies make a great family companion, but with proper training. Dachshund puppies have a playful personality, are affectionate and can dachshund puppy training should begin soon as he’s home. Start socializing immediately but you shouldn’t socialize the dog before it is 10 weeks old.

Dachshund Puppy Training – what to look out for

Truth be told, training dachshund puppies is not the easiest task in the world. Dachshunds are stubborn dogs and like having the upper hand. It is important that the owner establishes authoritatively that he is the top dog and the puppy should listen to him. If this authority is not established from the time the dachshund is a puppy, the dog may end up training you instead of the other way round. 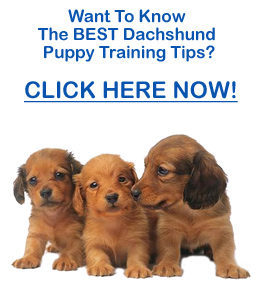 Dachshund puppies naturally have a curious nature. During the training sessions teach him to stay near you and not to stray about in public. It is better to start obedience training from three to six months when they are most likely to be less stubborn. There is nothing as discouraging as an unruly dachshund puppy in public.

As much as they are a stubborn breed, dachshund puppy training can still be carried out effectively. Dachshund puppies can still be trained if they are understood. These puppies respond well to positive and non-violent training. Do not punish the puppy or shout at him during training. He may end up resenting you and become aggressive. After the training sessions, always give rewards for any progress the puppy makes.

When training dachshund puppies you should have a schedule and stick to it for effective results. Dachshund puppy training requires commitment, consistency and plenty of patience. Since dachshunds have short attention spans short training sessions are best. A good training schedule should stimulate the puppy both physically and mentally.

Dachshunds love to dig around. It is essential that every dachshund puppy training schedule has sessions for teaching the puppy not to dig around in the backyard or garden. Given that dachshunds were bred as hunters digging comes instinctively to them. Digging is their way of burrowing after animals. The digging should be expected from dachshund puppies. The problem with the digging is that it ruins the garden, grass and flowers. What may even be worse is that they may also dig their way under the fence and escape. He may also be digging places with fertilizers and other chemicals thus endangering his health. One must be very vigilant when the puppy has not yet been trained to stop digging around. If the dog is persistent and dachshund puppy training does not stop the dog from digging, a good idea would be to get a special spot and fill it with loose soil then train the puppy to dig there.

It is important to teach dachshund puppies’ proper etiquette from the start. If etiquette is not taught early they may develop bad habits that will be difficult to drop later on. The best thing about dachshunds is that they are clever dogs and will learn quickly.