Dachshund temperament can sometimes be aggressive as they were originally bred to hunt badgers, rabbits, foxes, and other tunneling animals. Their strong, muscular legs and long, stream-lined bodies allow them to dig out their prey and fit inside burrows.

Because they were bred to hunt, Dachshunds are strong-willed creatures who have a mind of their own. Their courageous nature sometimes makes them aggressive toward strangers and other dogs. They can even be aggressive towards their owners. However, training them at a very young age to establish who’s the boss will turn them into extremely loyal companions and lifelong friends. Early training will also ensure your dachshund develops and maintains a mild temperament. 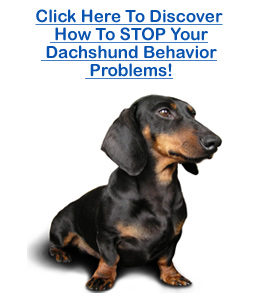 Dachshunds are playful and lively animals, and will make a game out of anything his owner will do. They love to fetch and chase after balls but will not always bring them back, especially if they get distracted. They should be kept active, busy and entertained with regular exercise. Bored dachshunds tend to display behavioral problems, so it is very important to engage their attention at all times.

The typical dachshund temperament is know to have a stubborn streak that can be frustrating for owners. They can be willful and manipulative at times. So it is imperative that they see their owner as the one in charge right from the very beginning. It is also vital to maintain consistency during training coupled with a reward system of a treat or a favorite toy. Verbal praise and positive reinforcement is encouraged as well. Correcting instead of punishing is the best approach when training a dachshund.

Dachshunds are typically wary of strangers and are known to bark at unfamiliar people or dogs or even unfamiliar sounds. This temperament trait make them excellent watchdogs. They will definitely let their owners know if strange people, animals or cars are coming.

Despite being wary of strangers, a dachshund’s temperament can also be docile and they can make great family pets. They get along well with children, but owners should still be cautious if they are around very small children. These dogs can be picked up incorrectly or tripped over and get injured which can result in an aggressive behavior.

They also occasionally do not get along very well with large dogs and can be irritable and snappy with other dogs. So it is best if they are the only dog, although another dachshund should not present any problem.

Because of their strong temperament and instinct for hunting, dachshunds should not be taken off the leash unless in a fenced yard. They have the tendency to take off quite suddenly if they see something interesting and may not come back even if called. They are best kept in a backyard, however they particularly like digging so the lawn or plants in the backyard may suffer. It is best not to leave them unsupervised for long periods of time and to discourage this kind of behavior.

Training with consistency and positive reinforcement is the key to good behavior. If a Dachshund thinks that his owner’s actions are unfair, they may growl, snap or even bite. This is because they were bred to hunt, resulting in a determined and independent nature.

Dachshunds love treats, so a small food reward is the best technique for them to be trained quickly and effectively.

A dachshund temperament overall is one of fierce loyalty and protection. They stand up to any threats and can have an aggressive streak at times. However they are also loving and affectionate, and make great family pets as long as they are trained properly from an early age.