Dachshunds are playful but you should never let your dachshund jump to high places as he is playing. Jumping is bad for their backs. However, simply standing on their hind legs is ok. As an owner of a dachshund you must keep a close eye on your dog and watch out for dachshund jumping until he is trained not to jump.

Dachshund problems arising from jumping are attributed to their long bodies which are so low due to their short legs. Strenuous jumping can cause wear and tear of the dachshund’s joints and spine, causing spine and back problems. If you see your dachshund jumping high and dropping back down you need to stop him immediately and make him know that it is wrong. Eventually he will learn and will keep from jumping. 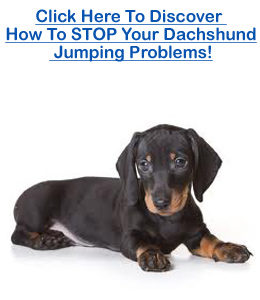 You should not let your dachshund jump on and off furniture without assistance. Their backs may bend the wrong way placing pressure on the discs. Follow the tips given by your vet to deal with the problem of jumping by your dachshund. The dachshund may not know that it may harm is back by jumping and it is up to you to discourage him from jumping. This is important in order to avoid back problems which are a major concern for dachshunds.

If the dogs need to climb to some place lift him up and also bring him down and handle him in such a careful manner ensuring that you support his whole back. Dachshund jumping causes too much strain on the dogs back and can lead to serious injuries. Children should never be allowed to lift the dachshund as they may not handle him the way the dog should be supported during lifting. They may harm the dog’s spine in the process.

As a result of jumping, dachshunds are likely to suffer slipped and ruptured disks. To avoid back problems which are often associated with jumping it is important that as you discourage dachshund jumping, you should keep the dogs weight in check as well. It is much worse when an obese dachshund attempts to jump than when it is a healthy dachshund. The consequences are much more serious. This is because obesity strains the dogs back even more while jumping leading to serious back problems.

It is however unfortunate that one in every four dachshunds will become paralyzed in middle age from disk disease. The vertebra of dachshunds is weak due to their elongated structure and short legs. This sounds scary but it does not have to happen to your lovely cute sausage dog. Healthy dachshunds are known to live long healthy lives ranging from 12 to 15 years. You must therefore train the dachshund not to jump from beds and furniture and whenever he has to climb, help him by lifting him. Otherwise he may end up paralyzed due to dachshund jumping. You must be very careful with your dachshund dog. A dachshund is a special dog with a special physique and special needs.